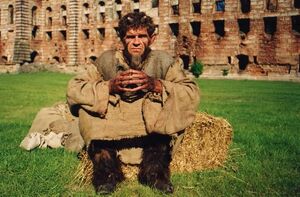 Lech Dyblik as Torque in The Hexer.

Torque is a sylvan who lived in the fields of Lower Posada in Dol Blathanna. He tried to help the elves who lived in the Blue Mountains, and had an agreement with them: grain and corn and other agricultural goods, without killing humans. He appeared in the short story "The Edge of the World".

In the Polish Movie and TV series[edit | edit source]

The same story is retold in episode 7, "Dolina Kwiatów", of The Hexer TV series. He is portrayed by Lech Dyblik.