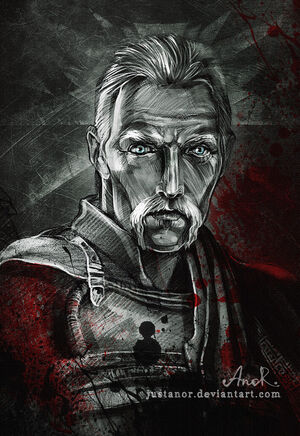 Leo Bonhart was a human bounty hunter, assassin and previously, a professional soldier. Known for his professionalism and being expensive to hire, he was said to have cold, expressionless eyes, which were often likened to fish eyes. Bonhart found pleasure in watching brutal scenes and inflicting pain to others. He was described as very tall but ghoulishly thin, with a prodigious grey moustache.

He possessed three witcher medallions, depicting the heads of a wolf, a cat and a gryphon, and claimed to have killed their previous owners. A claim which was not necessarily in doubt, given his prowess with a sword.

Bonhart was hired by Stefan Skellen to kill Ciri and by baron Casadei to capture her alive. Bonhart killed the Rats band to which Ciri belonged and cut off their heads after their deaths. He neither killed Ciri, nor brought her to baron Casadei, therefore fulfilling neither of his contracts. He imprisoned her for some time, beating her, mistreating, drugging her with fisstech and forcing her to kill in the arena at Claremont, which belonged to his cousin Houvenaghel.

Ciri escaped Bonhart with the help of Neratin Ceka while they were in the village of Unicorn. Bonhart had gone there to meet with Skellen and Rience. Bonhart then killed Neratin Ceka, and Skellen seriously wounded Ciri with an orion as she escaped with her horse, Kelpie. Later, Ciri hid and healed at the hermitage of Vysogota of Corvo in the Pereplut swamp.

Together with Skellen and Rience, Bonhart tried to hunt her down on Vilgefortz's order. Eventually, she escaped to Tor Zireael.

At Stygga castle, Bonhart killed Cahir, but was later slain by Ciri.

In The Witcher, Bonhart is mentioned by Jean-Pierre when you first meet him in the swamp. According to Jean-Pierre, "Old Leo" was a witcher slayer and is known as a legend, witchers and mages were no match for him.